Anybody who’s developed a modicum of chops with Google ads knows how utterly Darwinian Google is. Most of your ads

vanish forever after being seen by (maybe) a few thousand eyeballs.

1% of the advertisers get 50% of the traffic. Everyone else fights over the scraps. And every ounce of your AdWords education costs you money.

As an advertiser, you know that a major key to success is proliferating dozens of ads in as many creative directions as you can until you find your customer’s “Sweet Spot.”

What you might not realize is how much AdWords can teach you about real evolution – the kind they debate in science class.

Most interesting of all is that it highlights a crucial mistake Charles Darwin made 150 years ago. You may not be aware that modern evolutionary theory is in a massive state of flux right now. Old-school “Darwinians” are in a panic as of late.

As I shall explain. One of my favorite blogs is that of University of Chicago geneticist James Shapiro, who writes for the Huffington Post.

Dr. Shapiro has impeccable credentials. He was the first to discover that bacteria have the ability to massively re-arrange their DNA in 1968. He was mentored by the Nobel Prize winner Barbara McClintock, and he holds an Order of the British Empire medal from the Queen of England.

Shapiro has been firing salvos at old-school Darwinists who insist that the all-powerful driving force of evolution is random copying errors and Natural Selection, aka “survival of the fittest.”

Au contraire, says Dr. Shapiro — the real source of evolution and the flourish of life is the spectacular ability of organisms to exchange and re-arrange their own DNA in direct response to the environment.

In other words, cells re-write their DNA almost exactly the same way you re-write your Google ads: By watching, listening, predicting and calculating. A protozoan (complex microbe) under stress can splice its DNA into 100,000 pieces, re-arrange them, and produce a new protozoan in minutes.

Seldom do popular evolution books by Richard Dawkins and the like breathe so much as a single word about this.

They would have you believe evolution happens randomly and accidentally; that all you need is survival of the fittest and given enough time, “presto,” you get an entire earth filled with life.

‘Tain’t so. If you’ve built a few AdWords campaigns… you know where the ads come from. You know exactly how the winners get sorted from the losers. You understand the evolutionary process very well, thank you very much.

In fact you probably know a few things you didn’t even realize you knew. Consider this diagram: 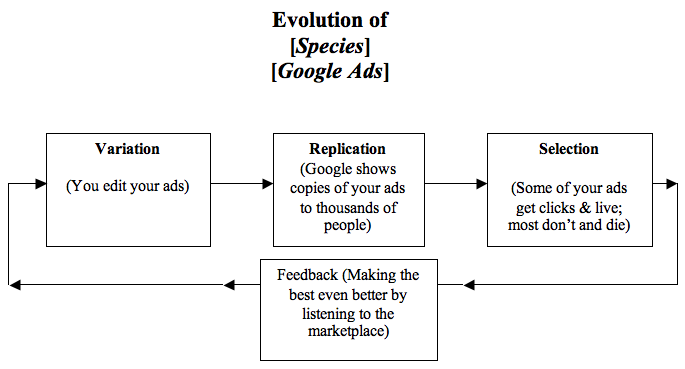 You write or rewrite ads. Google distributes them far and wide. People click on some and not others. Google moves the winners to the top and sends the losers to the scrap yard. You keep rewriting your best ads (a process which requires you to listen to your customers).

If you’re really good, you wind up at the top of the heap.

This is all everyday experience, the normal operation of the $50 billion paid search industry. Nothing controversial about it.

But what’s interesting is this: Living things evolve exactly the same way – which is NOT the way Darwinists have been telling you for decades.

Conventional Darwinists say DNA gets re-written by accidental copying errors, and that all the power is in the last step: “Natural Selection.” Natural Selection has attained a magical, godlike status in some circles.

If you’ve ever done Google ads, or even if you just look at the diagram, you plainly see that Natural Selection doesn’t create anything. Zero. Zip. Nada.

The marketplace will vote for or against your ads in maddening, frustrating ways that you could have never predicted. (I myself get those “Which ad won, A or B?” tests right, uh, about 50% of the time.)

But in the end, Natural Selection doesn’t add, it subtracts. It kills off the losers. It’s death, baby. That’s all that it is. There ain’t no life in death.

Where does the creative input come from?

In Google ads it comes from you, and what you hear from the marketplace. Likewise, Dr. Shapiro will tell you that the protozoan edits its own DNA much the same way you edit your ads: By monitoring hundreds of signals in its environment and responding with precision.

Charles Darwin was almost right… but not quite.

Darwin thought cells were blobs of goo. He had no earthly idea that tucked inside were incredible networks of sensors, digital code, signal processing, and 24/7/365 adaptation.

Shapiro has long been at war with a somewhat notorious atheist, University of Chicago biology professor Jerry Coyne. Coyne insists that all those DNA splices are blind and haphazard, and all the creativity comes from Natural Selection.

(Shapiro keeps his religious views to himself. Coyne uses his position as a pulpit for proselytizing his militant form of atheism.)

Cellular engineering is provable, though, and has been proven.

Everyone who’s ever done AdWords knows Natural Selection doesn’t create anything new, now or ever. The failure of one ad to get clicks, all by itself, does not in any way shape or form furnish fresh content for a different ad.

And in 10+ years of teaching AdWords to literally hundreds of thousands of people, I’ve never seen anyone beat their old ad with text that came from a computer glitch or data copying error.

The punch line is: Living things possess amazing natural genetic engineering ability. They edit their own code with greater skill than the smartest human programmers. They reprogram their instructions the same way you innovate your advertising:

The fact that cells adapt in such systematic, cooperative patterns, and not by accident, blasts a crater in the long-held notion that life is accidental and purposeless.

You and I are not just a bunch of billiard balls banging around in the universe. Every cell on planet earth is intentional right down to its DNA.

Jerry Coyne and his posse are boiling mad about this, but facts are facts.

If you have an appetite for science, I would like to suggest my book Evolution 2.0: Breaking the Deadlock Between Darwin and Design. Endorsed by numerous science researchers (Editor of the International Review of Molecular Biology, for example) this is literally the first book in print to explain how evolution really works in plain English.

But if you’ve been A/B split testing your ads like Claude Hopkins told us all to do in Scientific Advertising in 1918, you’ve already had an inkling of how evolution works all along :^}

Get 3 free chapters of Evolution 2.0