Joshua Swamidass from Washington University invited me to respond to conversations on his blog about Evolution 2.0. I wrote two blog posts in response.

We are asking: Are the mutations that produce useful changes in evolution random? Or not? 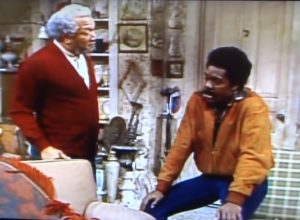 Appendix 1 of Evolution 2.0 is called “All About Randomness.” Longest chapter in the entire book. I took great pains to define randomness. I quoted some of it here.

Is a crisp definition an unreasonable request? Is it not normal and customary in all intellectual pursuits for people to define their terms first… and then debate?

Here, I gave a formal definition from information theory. Here’s a practical every day example of randomness: White noise from a TV:

For all practical purposes, this TV noise is random. Both picture and sound. Wanna know what random looks and sounds like? It looks just like this.

What is a signal? A signal is the order that you are trying to transmit. Whether encoded in a TV transmission or strand of DNA.

All signals have noise. Noise is the enemy of your signal. Always. It’s never your friend.

This video is a noisy TV signal. As you watch this, you can clearly distinguish the signal from the noise:

Joshua Swamidass said to me, “I think you have a false conflict in your mind between random and order. That needs to be stamped out if you want to make sense of this.”

Joshua, you have this exactly backwards. In transmitting and receiving information, there is always a conflict between random and order. The conflict is not false. It is real. Joshua, you are mixing randomness with order, then labeling your conflation of the two ‘random.’ I am making a clear distinction between the two.

Order = signal. Random = noise. Signal is not noise. Noise is not signal. I do not know how to be any clearer with my terminology.

Cells detect noise. They have at least three layers of error correction. They devote enormous resources to this. They fight noise (copying errors, mutagens) at every turn. Evelyn Witkin discovered bacteria even switch on more error protection when they anticipate noise might be coming!

Organisms also harness noise at times, holding most parts of DNA fixed while changing small sections, as they search for a solution. Your immune system does this.

Joshua Swamidass, for the fifth time… will you please define what YOU mean by the word random?

« A Letter (And Question) from Martin Rag Concerning Unchanged Organisms and Evolutionary Creation
Are Evolutionary Mutations Random? Or Are They Engineered for Success? »
Loading...
Loading...